I feel bad that I have not been blogging much lately. It's funny that my clever catch-phrase for the Po'buckra blog is "an unsettling look at nowsville". Very little of what I feel like writing about is about "nowsville". To be honest, not much good is going on for me at the moment. Stuff kinda sucks actually, but I got friends, music, movies and the most wonderful and beautiful wife on the planet, so I'll get through this eventually.

I do find it therapeutic to write about my past, though. I've been very fortunate to have had such wonderful and creative times with all of the bands I've been in. It's been a blast writing this stuff down! I enjoy the hell out of the nice responses I've gotten from readers. I was a bit shocked when I discovered that my brother had signed on and subscribed to the MySpace blog, but he's digging it ("quite and education!"). Not so sure that my sister would enjoy it so much, though!

The "my life in music" blog is coming to a very critical point in my life. I've got one more "disco days" post to make and it's gonna lead into some pretty heavy shit, and I have decided to go ahead and write about it. Some of it will have little to do with music - after the disco bands I didn't play with anyone up until Jamie reformed the Happy Eggs during Charlotte's punk/new wave..."explosion". From there, I consider my history in bands as current, even though it was 28 years ago!

Up until then all of this has been very distant, ancient and even abstract. Most of the people that crossed my musical path are long gone from my life and I've never really worried too much about some of these folks ever reading any of this stuff. But with this new fangled Internet thing, you never know!

1980 leads me into what I consider more...delicate territory. I'll deal with it when I get there, but it calls for a bit more finesse on my part. I certainly don't want anyone to feel concerned that I may write something that may come up and bite me (or them) on the ass.
Should be an interesting dance.

So, please bear with me....ultimately I need to define who the hell I really am.

Speaking of the past....I've been reading Dave Thompson's book on my all time fave band: Cream. What (brilliant) arseholes! And what the hell is up with Clapton's......pants? (actually, the "armadillo in the pants" is briefly discussed in the book. He thought the chicks would dig it). 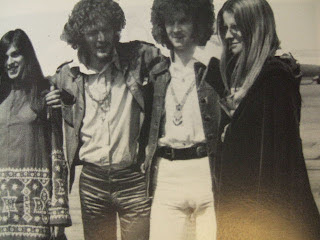 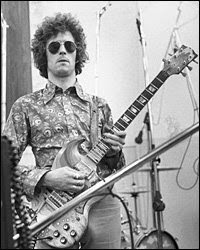 How timely! Scott Miller has been posting his thoughts regarding what he thinks the best songs were for each year, from 1957 - 2006. Scott's definitely a list type of guy and I eat 'em up. I love hearing his thoughts on music.

His last post was about 1977. That was my first year playing disco music with Rhapsody. Good Lord what contrasts! Not that disco music was ever my favorite kind of music - I was very much still into...players music (pretentious) such as Weather Report, Return To Forever and Steely Dan, but I find it really interesting in reading about that other music from the same era.

I sort of knew about punk rock and such at the time, but I don't think I actually heard it until 2 or 3 years later (thanks to Jamie Hoover). It was then that I went over to the dark side and got enlightened. 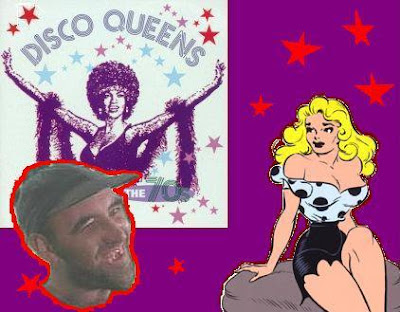 Skyline’s 2nd engagement was a 2 week stint at the Ambassador Inn, in Johnson City, Tennessee. I remember....parts of it well...

The Ambassador Inn was a disco club out in the sticks. Actually, most of Johnson City is in the sticks, but this was a stand-alone club not associated with a hotel. Nice big dance floor, good lights, booming sound system, and a very cool staff. Matter of fact, they had a woman bartender (babe) that had the very first nose-ring I had ever seen. This was in 1978, and it blew my mind a bit. The bad news was that there was a very predominate sign posted on a column near the dance floor that stated in big bold letters: “NO SAME SEX DANCING!” It was the first and only time in all of my years playing in clubs that I saw such a sign. I was confused. The babe bartender was a lesbian with a nose ring, our band was racially integrated, but "NO SAME SEX" couples can dance together. Weird! Whatever....(actually, it probably wasn’t until the early 80's that I would finally “get it” that lots of gays went to discos and danced together. It just wasn’t on my radar back then. Especially in the South. And ultra-especially in Johnson City, Tennessee).

In the course of the first week I met this marvelous young (and cute) couple (straight) and we quickly became friends. This was unusual for me - with Rhapsody, most of our audience were older and...(occasionally) a tad...creepy, but this couple was my age and very cool. We had a day off coming up and they invited me on a guided tour of the backwoods of Johnson City. They had a jeep and told me they would show me the real deal. Sounds a little sketchy, but I trusted them and decided that I needed to see the world, so I agreed.

This was an important to me - my girlfriend was always stressing the fact that I needed to travel, see new places and pick up new experiences. She and her sister traveled a lot together, be it in Europe or the States. The only traveling I had really ever done was with the family at vacation time (which was usually limited to Pawley’s Island S.C., or our mountain place near Cashiers N.C.). Sure, I had certainly been to a lot of cities with the disco bands, but generally that just involved driving from Point A to Point B and staying confined to the hotel area. We never explored the territory - just hung out in our rooms sleeping, learning songs and when possible, rehearsing in the clubs during the off hours. Now I had a chance to do something exciting and to finally see the world. National Geographic....here I come!

It was awesome. The couple picked me up early one morning and we headed out. Took back roads, dirt roads and trails. The mountains and scenery were breathtaking. As we got further into..nature..things got very interesting, and two things stand out in my memory.

We drove by an old beat-down impoverished house trailer just like the photos I would see in magazines or on TV, and I kid you not, in the front “yard” was a tire swinging from a tree. Sitting on the swinging tire was a young lady that I swear to God was the spitting image of Elly May Clampett or Daisy Mae from Li’l Abner - take your pick. Cut-off shorts and a polka dot shirt tied in a bow just above her waist. I could not believe my eyes. It was the real thing and she even waved as we drove by! At that moment I knew I was seeing something most people only see in the funny papers or on TV, but this was real! It blew my mind. There is a big old world out there and I was now realizing that the ‘burbs of Charlotte were just a tiny little speck. I had seen and met mountain folk during visits to my family’s mountain cabin, but this resonated. I was not shielded by parents or seeing things through a child's eyes. I was seeing this stuff on my own terms, with people my age.

As we went further up the mountain, my new friends told me that we may come across some...moonshiners and to just act friendly, wave and we’d be on our way. It was interesting to learn that most of these folks were not making white lightnin’ any more - they had a new cash crop - pot. This was a bit unsettling to me (not sure why..) but at this point I was dialed in to my adventure. Sure as shit, we came across some of these folks.

Up ahead on a dirt trail we saw 2 men. Real hillbillies dressed in overalls, tattered hats and most importantly - real shotguns slung over their shoulders. Holy crap! They heard our approach, looked back at us. We waved, they waved and we went on our way. How cool is that! Of course in the back of my mind I was half way expecting them to kill my new friends, kidnap me, and eventually make me squeal like a pig as they took turns having their way with me, but that didn’t happen. Maybe these hillbillies had seen the "NO SAME SEX DANCING!" sign as well.

The rest of our journey was uneventful, but I was pumped with excitement and I couldn’t wait to get home to tell my girlfriend what I had done and seen with my own two eyes. I don’t remember a thing about our shows at the club (who would?), other than the fact that I made $350 for the 2 week engagement. But big changes were coming and things were about to get very weird.
Posted by Gil at 2:17 PM 3 comments:

Two Nightmare Images From My Past Are Gone... 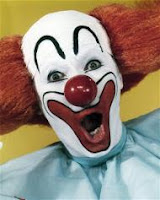 Honestly, I don't know which image frightened me more as a child.

I'm not alone in my opinion that clowns are scary. While I'm sure Larry Harmon was a good man and meant well, his persona as Bozo the Clown gave me nightmares. I think the combination of make-up, maniacal grin and the shock of red hair looked more like a disguise to me. A way to go undetected as he hid under my bed at night, patiently waiting for me to fall asleep so he could drag me under the bed and start chewing the flesh off of my bones.

Jesse Helms on the other hand, stood for everything that was wrong to me as a liberal, long-haired hippie rock n' roll musician in the early 70's. The first 26 years of my life were spent in North Carolina, so I had a lot of up-close knowledge of his hateful politics. While I'm also sure that he'll be missed by his family and loved ones, his politics will not be missed. His policies and campaign tactics also hid underneath my bed at night, waiting to gnaw on my soul and to eat the heart out of everything that should be good, fair and tolerant. Things that this country should stand for. You know...freedom and democracy...stuff like that.
Posted by Gil at 2:08 PM No comments: 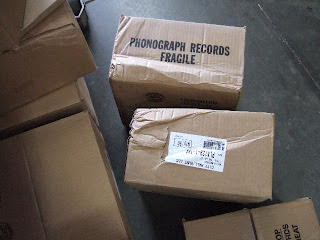 As I've mentioned before, the resurgence of the LP has hopefully given me a tad more job security, and indeed, we are still selling tons of 'em. The downside is that they do not travel well. I now spend most of my time at work filing damage claims.

But at least I have work.

Here's something that cracked me up, regarding the LP phenomenon.
Here's what the experts are saying
Posted by Gil at 7:10 PM No comments: