Why A 55 Year Old Man Has Decided To Get Tattoos 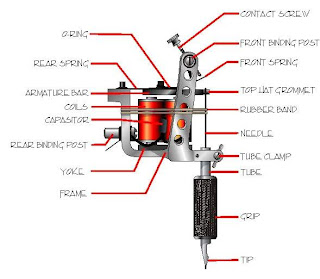 I know, tattoos are old news. Before the advent of Punk and New Wave, tattoos were mainly for sailors, bikers etc....in the early 80's I had a couple of friends that started to get some. I loved the concept then, as I do now. It's simple. It's art. And it's very personal. And they do not wash off!

Before you knew it, it became very popular. Rockers, athletes, hipsters and business people all seemed to be getting them. That bothered some folks, but not me. I think it's cool that anyone would make an artistic and permanent commitment, no matter how trendy it all became.

My hesitation was simple. What do I want on my body and who is the best artist to do this? 30 years later, it all came together. I did not take this task lightly. Literally, years (decades) passed before I found the right design and just by happenstance, the right artist to pull it off.

It had to be meaningful (to me) and it had to be executed well. As far as meaningful goes, certain subject matters have been stuck in my brain for years. I just had to settle on the right images. Things that are close to my heart. The subject matter basically fell into 3 categories: Film, Music and Science Fiction (old school, of course....I'm an old school guy!)

Another factor in all of this is that you are not on this planet forever. Life can be cut down short, and I felt that now is the time. You never know. No one gets outta here alive, and dammit, I want some tattoos! Tattoos look best on young, fresh skin and at 55, I have very few places on my body that remain that way! Fortunately, my shoulder has good skin, and my non-driving side (left) arm is OK, so there were choices.

Stacey and just happened to walk in a new satellite location of Sacred Rose Tattoo in Albany. We met Daniel Herlihy and he allowed us to look through some books of the tattooists that worked at that location. His book blew me away. The tattoo my eyes lit upon was such a small and simple tattoo, but the lines were very clean and his colors were great. I found my guy!

I told him about my ideas and he seemed interested in seeing them, thus an appointment was made and now I had to go through my ideas (many images saved on my computer) and choose the one I wanted to start with.

I am a huge Federico Fellini fan. His films wormed their way into my heart back in the late 70's when I took a course in college called "Appreciation Of Foreign Films". We had a wonderful instructor, and the very first film he showed the class (on a 16 mm projector!) was Fellini's La Strada. Not only did I find the movie beautiful and well made, I was blown away by Giulietta Masina's mesmerizing performance, I simply fell in love with her in this film. A very tragic figure, but filled with such a simple warmth, naivety and a superb comic ability that is just heartbreaking.

Our instructor made a special point of describing in great detail of the ultra-fab composer Nino Rota's use of musical themes for each character. Combined with Fellini's images, the music is pure magic for me. Rota served as Fellini's main composer through most of his films and it is a collaboration that I think has never been surpassed.

Thus I knew what would be a meaningful tattoo. Something that would represent this image/music mixture that is so important to me.

As far as determining the image, I was in luck. Fellini was also a masterful illustrator. He has tons of sketches he drew for his characters and these images lend themselves into what what I consider great tattoo subjects - colorful, whimsical, and a true artistic sense. Luckily, the internet is filled with these images. Also, I have most every soundtrack these guy's did, recorded on CD, which are usually loaded up with photo's of Fellini's drawings.

I have an import CD of the soundtrack for La Strada and The Nights Of Cabiria that includes a fabulous drawing Fellini made of himself with Nino Rota. Heart be still! This is it!

I now had all the pieces: the art and the artist to render it upon my skin. I went for it and Daniel did such a great job! It really helped seal the deal when I showed him this image. His eyes literally lit up and he smiled. He loved it and I could see that he did and I knew this was going to work out well. And it did. 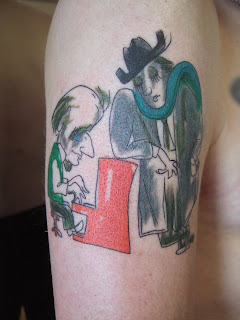 I was a little nervous about the pain factor. I know many folks with tattoos, some small, some large, and they all told me that the pain feels like someone is scratching you with a needle (which they are, but the needle is purring away at a million miles an hour!). As it turned out, since this was my shoulder side with no bones to tattoo over (which can be a bit more painful), the experience was not bad at all. Very tolerable. This one took about 2 1/2 hours, which did get a little tedious towards the end, but it was nothing I couldn't handle. And I'm so glad I did.

When Daniel was finished, he wrapped it with Saran Wrap and told me to remove it in about 2 hours. After that, wash it gently with mild soap and to just use my fingers. No scrubbing! The first 2 days I would do this several times a day and apply a light layer of Bacitracin. After that, keep the area clean and apply a mild, fragrance free skin lotion, also several times a day for 2 weeks. Expect scabbing and some color to fall off (and not freak out!). In 3 weeks it was basically "healed" and looked like it should, but Daniel mentioned that tattoos really take about a year to truly heal.

Of course, after the first one, I couldn't wait for the next one, so about a month later I got Gelsomina from La Strada done on my forearm. 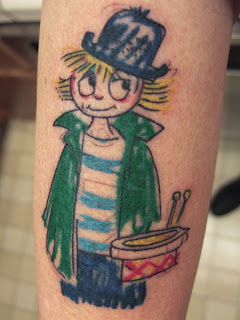 It's still healing and by God, I've booked my next one. Yep, another Fellini drawing, but after that, I will be done with Fellini. I gotta leave room for my Sci-Fi and music tattoos.