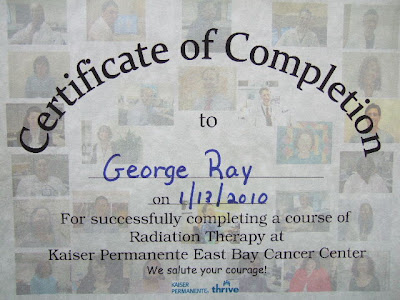 Well, there you go. I've graduated! I think I only have two other certificates that have been awarded to me - a Myers Park High School graduation diploma and while I was there, I won a Blue Ribbon Art Award for a linoleum cutting print I did of the coolest art teacher a kid could've had - Dean Barber. May he R.I.P...

But anyway, I'm not planning on resting in peace just yet, and while the above certificate does not give me eternal life, it does close a chapter on this journey that began last May. Good Lord! Next up for me will be a blood test in 3 months to check my PSA levels. Hopefully it will be around the zero range. If not, I'm sure the doctors will have yet another course of treatment to put me through, but whatever. We'll see, but I do feel optimistic. I now just want to relax.

I have avoided mentioning by name the medical group that has been treating me. I thought maybe I shouldn't divulge who they were for some reason or another, but I'm not going to black out their name on my certificate. I have nothing bad to say about them. Aces in my book, from the diagnosis, biopsy, the endless tests and scans, the surgery, the catheter adventures, the Lupron injection and as just completed, the radiation therapy. I trust them and their doctors. Of course it ain't over yet. They may not have cured me, but that's not the point. They've done everything in their power to try to cure me.

But what I want to talk about here are the troops in the trenches. The nurses, the receptionists and in particular, the radiation therapists. These are the folks that do the grunt work. They are on the job 8 hours a day seeing a steady flow of usually very sick and unhappy people. I was extremely lucky to have this particular group of men and women treating me. They responded perfectly to my brand of humor, which I was hoping would help them relax a bit, so I could relax a bit. I learned that this helps me enormously in getting through stressful situations, which became apparent in 1989 when I ended up at San Francisco General Hospital for emergency eye surgery after I got attacked walking poor Stacey (who had only been in San Francisco for about a month!) to my apartment from her job at Tower Records (another R.I.P...)

Long story short, a young man ran up behind us and smashed me in the eye with either his fist or some object. The result was a lacerated cornea that required 10 stitches to close, about 20 stitches in my face, and a 5 day stay in the hospital. He didn't rob us or anything, he just hurt me. Aside from knowing something was seriously wrong with my eye, (it felt like there was a huge chunk of glass from my glasses stuck in there - there wasn't), I was overcome with embarrassment that Stacey now had to deal with this. Welcome to San Francisco, honey. It's really a cool place. No, really!

In the ambulance, I told the attendant that I was really happy that my nose wasn't broken (one of my biggest fears), and he looked at me like I was crazy. "Sir - you have a very serious eye injury!" Oh..ok. Yikes!

At the emergency room, it seemed as if the whole hospital dropped everything and came to my aide. I remember sitting upright as phone calls for eye specialists were placed. Doctors were swarming at my face to get a good look at my eye, as I signed papers saying that I understood I could die during surgery (!), and an anesthesiologist asking me what I had for dinner (steamed spinach and tofu, which fortunately the guy replied with a much appreciated "remind me to never eat at your house!").

The thing that was getting to me was that everyone just looked so damned grim. I know they were just doing their job and wanting very much to save my right eyeball (they did), but it was all too much for me. I raised my hand and said "Stop! Is my other other eye ok?" "Yes" a woman doctor replied. "Then could you all please lighten up just a tad? You're freaking me out!"

I honestly do not remember how they reacted, but whatever happened, I think that I was able to calm down a bit, enough to give instructions to a nurse to please give a phone number to Stacey so she could call my wife (we were separated at that point) because she knew how to contact my family back in North Carolina. Imagine how my poor little morphine addled brain must have tried to process the sight of my wife and my girlfriend both staring down at me as I woke up from surgery! 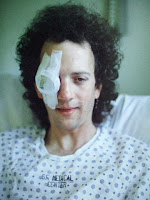 The point being is that a little bit of levity helps. It's a self-preservation lesson that I have had to call upon many times during my cancer treatments. I was so very fortunate to not have had any significant side effects from the radiation. The doctor told me that I stood up to the treatments "remarkably well", but the tiredness thing could rear it's ugly head after the treatments were over. I'm most pleased that my bladder hung in there like a fuckin' champ even though I now sport a permanent and very strange new...hairstyle...down there..(think Munchkin Merkin...or not....) 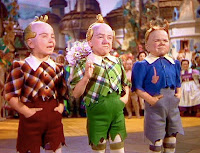 
But it was still a very stressful 33 sessions for me (too bad I couldn't get one extra 1/3 of a dose in to satisfy RIAA standards!). The endless driving from work to Oakland, the constant battle to avoid constipation, the insane task in arriving with a somewhat full bladder (but not too much!) for the actual zapping, and just plain dealing with something ugly I had to put my body through, yet again.


Yesterday at my last session, I was saying some genuinely sad goodbyes to my therapists, and one of the guys (who is a San Jose Sharks fan!) told me this: "Mr. Ray, not many people come through here joking around with a sense of humor like yours. It was a real pleasure working with you." I told him that I have learned in life to always tip your bartender (this goes back to my Game Theory days when drink tickets seemed to be used up during soundcheck...) and most importantly, be good to the caregivers. His comment really made my day, but it is indeed tempered by the fact that it was the only way I could have made it through this, and most importantly, my cancer never hurt.

Unless something bizarre or newsworthy comes up before my PSA test in 3 months, I'm gonna shut this part of Po'buckra down. I'm going to try to get back to more fun things such as pop culture, adventures with Dexter and hopefully resume my "Life In Music" series. I believe I need to start wrapping my brain around my time with The Happy Eggs!

So there you go.

I now know that I could die tomorrow and die as a man that knows he is truly loved. I have received so much love and support from loved ones close and far away. The world is filled with great people whose job is to help you and I can now accept them warmly into my heart. It really is a beautiful thing, and I will do my best to give back. Love makes the world go 'round. Treat others nice, cause you never know when you might need a free beer.


I will leave you with my very favorite quote from this adventure. This was from an on-call emergency nurse during a particularly rough weekend: "Mr. Ray, the doctor says to relax and don't worry. A swollen and discolored penis is completely normal at this time."