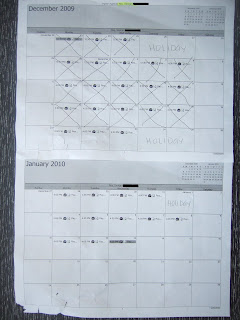 Check out my cool Xmas/Radiation Advent Calendar! The best thing about it, other than remnants of where Dexter has tried to eat it, is that I'm over the half way point! So far, so good. No major problems or side-effects other than having a bit of a cold at the moment, and a slightly queasy stomach.

One thing about this calendar that a couple of people have mentioned is that I get a couple of holiday breaks; 4 days off in a row for the major holidays. I assume the remaining cancer cells do not know this and I hope they will not take it upon themselves to go nuts while the radiation beam, the techs, and myself take some well deserved time off. Maybe I'll trick them and replicate the 20 second high pitched sound I hear as the machine makes it's seven stops around my body each session! Ha! Gotcha!

Oddly, the moment I decided to give a listen and to try to make my fellow cancer pals crack a smile, I have found myself the only guy in the waiting room. It appears my sessions are the last ones of the day, so most folks have cleared out. There are plenty of women in the other waiting room, but the conversations sound fine without me. You go, girls!

But I have developed a pleasant and fun relationship with the techs that carefully adjust my body so that the laser beams line up just right with the guidance markings and tattoos on my body. We kid around a lot, but not too much. They work hard and are super diligent and I appreciate that a whole lot.

But enough of that..I want to talk about snow!

North Carolina is getting some snow right now (as is much of the mid-Atlantic states - I have seen some photos friends have posted on facebook). What beautiful stuff! Of course in Charlotte, which seemed maddeningly and perpetually on the wrong side of the fine line of either snow or just rain, the snow was not a season long battle to deal with, day in and day out. It was a unique break in the week that meant no school or work, and how lovely and special it was!

As a young adult, I discovered that my most favorite thing regarding snow was the sound it made: No sound at all. Total quiet, especially late at night. I loved going outside to just walk around listening to the crunch of it underneath my feet and then just stopping and listening. Nothing. Stillness. Peace. The world was smothered under a gorgeous white blanket with millions of shiny jewels reflecting the light. So gorgeous and so quiet.

I particularly loved looking up at the streetlights and the areas that they would cast their light upon - the trees, the roads, the bushes - all were now other worldly. And so quiet.

One of my very favorite Game Theory moments took place in the snow. I do not remember the year, but we were playing at the Blind Pig in Ann Arbor. It was at a point of the tour that I just couldn't deal with another slice of pizza for dinner (and actually, a little time by myself was needed too), so I left the club on foot and walked around the neighborhood until I found a little diner. Perfect! At that time I was somewhat of a vegetarian, so I had my usual diner fare of that tour; grilled cheese sandwich, french fries and a coke. (Hey - I just said I was a vegetarian, not a health food nut..) The dinner was fine and it was nice to be alone.

While I was eating it started to snow. Pretty heavily, strong enough to start building up on the streets and ground, and swirl around the streetlights. It was beautiful, and I took my time walking back to the club. As I turned the corner, I was absolutely shocked to see that a line, about half a block long, was waiting to get into the club to see Game Theory! Good heavens...I had never seen this before! I continued my walk on the other side of the street and people started to recognize me and call out my name! I was stunned. I stopped to savor the moment - it could be the only time in my career this would happen (it was), so I stood there and took it all in. The snow, the cold air, my warm belly filled with a grilled cheese sandwich, the crunching sound under my feet, the line of fans, the autographs, a fabulous club and a rocking band...and for that one moment it was all mine. I was at peace.

I would like to ask that those of you that are lucky enough to have snow on the ground tonight, to please steal away a moment for yourself to go outside and find a nice spot to stand in and just take it all in. And while you're at it, give it a listen for me. I'd like that. It's my favorite sound.

I wish you all love and peace this holiday season, and heartfelt thanks for being here.