Yesterday I had started composing my next post regarding the next stage of my cancer treatment. I've gone back to it today, and I'm finding I just don't really feel like putting a whole lot of effort into it. But this time, it's not frustration holding me back, or broken spirits preventing me from tackling this again. Far from it.

Finally, I got a number that I can live with. It's a very tiny number, too.

That's not a typo, friends. That number means that my PSA level is dang near undetectable.

At this moment, I do not know how this will effect the radiation treatments that were scheduled to start around now. It's possible that I may need less. I will know more once I meet with the oncologist. But I do know that my surgeon is very excited about this number.

So - I'm gonna ride this for a while. I just don't feel like writing about some potential bladder problems I'm experiencing at the moment. I'm going to look at the big picture for a while, and learn to love the very small number that I have earned.

I'm not out of the woods yet, but the woods just got thinned out.
Posted by Gil at 7:38 PM 1 comment: 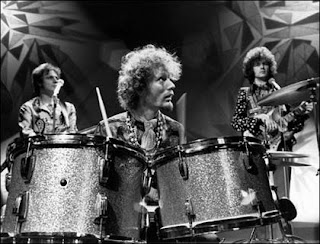 Probably my first favorite drummer on the whole planet was Ginger Baker of Cream. His fiery red hair, demonic looks, but most importantly, his playing sent me reeling into the world of serious rock drumming. Of course the guy from The Safaris that played Wipe Out, and Dave Clark's fab sounding snare drum caught my ear first, it wasn't until later in the 60's and the advent of psychedelic music that I learned to get deeper inside the music and knew for sure that I wanted to really be a rock drummer.

Ginger was a force. I was infatuated with his double-kick drum set (so much so, I persuaded my mom to order me a second bass drum from Charlotte's Howren Music!), but most importantly, his playing was (actually, still is) so strong, perfectly combining rock chops with jazz, R&B and elements of World Music - specifically African drumming. He really understood and brought forth the herky-jerky world of syncopation. While a reviewer from Rolling Stone (I think!), derided this performance, I think his fab display of syncopation on Creams's version of Born Under A Bad Sign is a thing of beauty. Such a strange beat! I have trouble even trying to understand what the hell he's doing, but it tickles my ears.

In the new issue of Rolling Stone (probably the first one I've bought in about 20 years!), there is a fascinating, yet ultimately disturbing look into Ginger's current
life. What demons! According to the article, he has been chased out of just about every place and country in the world he has lived in. He now lives a bitter and solitary life with a young South African woman (whom he seems to treat like shit), some dogs and his beloved polo horses...OK, bonus points for being an animal lover..

He appears to be addicted to a morphine inhaler, pain pills, anti-depressants and still puts away 3 packs of smokes a day. The townspeople all hate him - he carries a stun gun for protection - and he seems to believe that assassins are after him. Unfortunately, he has had dogs poisoned and horses maimed. He just does not sound like a very pleasant gent!

The weirdest thing that struck me is that even since The Graham Bond Organisation (around 1965), he and Jack Bruce still cannot get on in life and be in the same room together! Bruce approached the other members of Cream regarding another reunion tour that would have brought them millions of dollars, and Baker responded by shouting "There is no way!" and bitterly recounted how that last reunion ended terribly with he and Jack going at it regarding stage volume. They have been doing this for over 40 years! They have hated each other for about 43 years!

Whatever, it's a shame. But it's also sad. I hope Ginger Baker can find peace. It sucks when one of your heroes is a prick. 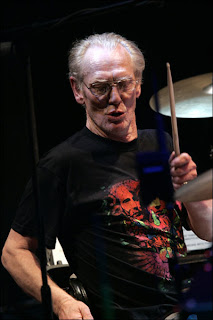