There Are 8 Million Stories In The Naked City...

...and in the radiation/oncology unit, I'm hearing all of them...

I've just completed my first three radiation sessions (only 30 more to go!), and it's already a grind. Driving back and forth to work, the hospital and home, anxiously monitoring traffic conditions on the computer, and well, driving. I cannot stand being late so of course I end up being early, but that's OK. I can leisurely run up to the cafe upstairs and grab a pretty decent sandwich to take back to work for lunch. From there, I check in and let myself into the locker room to change out of my clothes and into my hospital gown. Since my lower parts are getting basted, I have to remove pants and underwear. Shirts and socks and shoes are OK. It's a great look.

From there, I go into a small waiting room with 3 chairs opposite 3 more chairs. There is room enough for the chosen ones to walk through to either get to the locker room or the radiation room. When it's your time, the techs come and get you. It's an efficient system, with usually not much actual waiting..if one was not so compulsively early!

Part of being a reasonable and good person is to reach out and listen with a sympathetic ear to people that feel the need to tell you their story. Unfortunately, in this case, it is their cancer story. But in this club, you are also asked (and compelled) to tell your cancer story whether you feel like it or not.

My first story was from a kind and gentle man with colorectal cancer. It was his last session of his 6 weeks of radiation treatments. His surgery is coming later. He looked pretty good and had a nice, sweet smile. After he told me his story, I paused, not yet sure of the cancer club protocol, and after a few seconds he asked me what my particular problem was. I told him. It wasn't a natural progression of bonding, but there it was, and we did.

He was called for and went off for his treatment, and another man entered the waiting room. Disheveled and on crutches, he sat next to me and mentioned I must be new here because he had not seen me before. This was his last week of treatments, so I am definitely the new guy in the club.

After he told me the story of his crutches (a 40 year old motorcycle accident), he started telling me of his lung cancer. Since he didn't bother to close the back of his gown, I could plainly see a large radiation sunburn on his back, roughly where his bad lung was. It's actually only half a lung at this point, I learned. The other half was removed 2 and 1/2 years ago.

He then told me of how painful it is to swallow, but he has a numbing liquid, the viscosity of "shampoo", that helps somewhat as long as he pulverises each bite of food he takes.

At this point I started to freak out. Not on the outside - I was listening, commenting and really feeling empathy for this poor guy, but on the inside, deep within my soul I was was screaming; Nooooooooo!!!!

Lung cancer man was then called for and I wished him well. Colorectal cancer guy came out of his session and a very humorless nurse presented him with a certificate of completion! Good Lord. I was wondering if you get a souvenir. The sweet man took it and gave me a quick glance and smile and then asked the nurse, "Does this mean I'm cured?"

I was a bit shocked when she matter of factly replied, "No. It just means you have completed he radiation treatment".

This is when I realized what my purpose is, here in the Cancer Ward. I reached up and touched the man on his shoulder and with a shit eating grin told him and the nurse, "Man...that's a loaded question!"

It worked. Both laughed.

He turned towards me and held out his hand and wished me luck. I returned his handshake with well wishes of my own, and I really meant it. I now understand. While I don't want to be in this club, I am. They don't want to be here, either. We are going through terrible shit, and like it or not we're going through it together. We are going through it for one reason and one reason only - we want to continue living. And what is living, true living, for other than to help one another through the hard times? Those times are here, and now I feel I have place in the cancer ward. Levity. It's not much, but I think it can certainly help my new friends.

So whoever I meet next, be it bladder cancer guy, thyroid cancer guy, or brain cancer guy - nice to meet you. I am prostate cancer guy.

Like I said, there are 8 million stories in this Naked City, and I'm hearing all of them. But with no pants or underwear on.
Posted by Gil at 1:05 PM 4 comments: 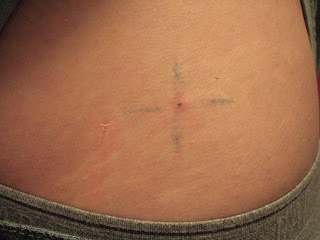 I have wanted a tattoo for most of my adult life, but to this day I just cannot think of what I want the tattoo to be of. I have a few ideas, but eventually I guess I will need to just take the concept to the tattoo artist and let him do his thing. The tattoo you are looking at is indeed a tattoo and it is mine, but this is not what I had in mind! It's a cancer tattoo and I now sport 3 of 'em! One on each hip and one on the front, about 5 inches below my belly button. The tattoo is the little black dot in the center of the drawn on lines. It's purpose is to insure they align and target the radiation accurately every session. Ink! Tribal!

Today, Stacey and I met with the oncologist/radiologist nurse for information about what I can expect during this part of the treatment. He was very nice, soft spoken and earnest, and I couldn't help but notice that was also really good looking. I was sure Stacey was thinking that too, but I just hope she was listening to what he was saying because my mind tends to....wander...when I have to listen to important stuff like this.

He mentioned the most common side effects: burning urination, diarrhea, unhappy skin and tiredness (and you thought we were done with pee/fart & poo talk!). Hopefully the tiredness will not rear it's ugly head well into the treatment. He also gave us pamphlets and support group info (unfortunately, thanks to one of the pamphlets, I learned that my cancer is considered Phase 3, with Phase 4 being the worst. Damn! Printed matter freaks me out!). He showed me the changing rooms and lockers that I will be using everyday, along with I.D protocol which as you can imagine is very important. Don't want someone else's radiation treatment for say...brain cancer!

He also talked about the scheduling, which I was concerned about. It would be best if I could get early mornings or late afternoons to help cut down on my travelling between work (Marin County) and the treatments (Oakland), but he showed me the daily list of radiation treatments this particular center gives and I was astounded. About 5 pages of a list of names in pretty small print. There are a lot of people getting these treatments.

After the orientation, I was off to get a cat scan of my pelvic region. This is to help them map out where they want the radiation to be administered to. I met the 2 techs (that I will definitely get to know over the course of 6 weeks!) and they explained a bit more about all of this.

There was a bag type thing that they positioned under my legs, once I was laying on the cat scan table. After they positioned me, they inflated the bag and it formed a mold of the backs of my legs. This is another method of achieving accuracy in targeting the beams of radiation. Every session it will be put under my legs to hold me in the correct position. Then, with the guidance of laser beams, they started to mark my body with markers. Once they were satisfied with that, they put a drop of ink on the 3 specific areas and poked it into my skin with a quick needle prick.

That was that. Got my tat. Oh yeah...this clinic also provides valet parking. I'm so....Dennis Rodman!

Next Friday I go in for a x-ray and weigh-in. The Monday after that, I begin the radiation. Talk to you then!
Posted by Gil at 7:39 PM No comments:

Well now....I've been feeling absolutely great for the most part these last several weeks, but now it's time to go back to the hospital and start feeling crappy again... Nice!

Next week Phase 546 begins of my cancer treatment: Radiation Therapy! Can you tell how excited I am? Not. Whatever - time to blast those rogue (Palin-like) cancer cells that are still partying around my nether regions. I am so not looking forward to it. Maybe even more than the surgery. That was something finite - an event that would happen and then be over, with allowances for recovery, of course, but in the weeks leading up to it I just sort of accepted it, cussed at it, but didn't really dread it.

Not so with this, though. It just seems so... unrelenting. A radioactive blast everyday, Monday through Friday for about 6 weeks. The possibility of the return of very unattractive side effects. Cumulative wiped out-ness. And a whole bunch of unknown thrown in for good measure. More work hours to be reduced and more paperwork for benefits. More, more, more.

The hormone treatment hasn't been bad, though. The hot flashes are seldom and mild, but my emotional state has fallen to a pretty permanent state of crankiness. I'm a son of a bitch right now, but I guess that's to be expected. Grrrr. 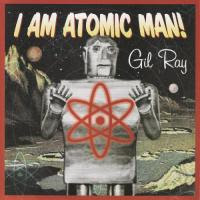