Years ago, I started a My Life In Music blog. If you wish to catch up, click on My Life In Music at the end of this post. Then go backwards. Most of them are there. A few early one's are still on my PC hard drive that I have not gotten around to converting to Apple….Someday..

I don't really remember the demise of The Happy Eggs. We put out a great EP and generally played to packed clubs, but Jamie was putting more time into the extremely popular Spongetones, and my wife and I were tiring of Charlotte's lack of alternative cultural outlets. The New Wave/Punk scene was floundering, the Bible Belt was roaring, and we thought it would be a great time to explore the possibilities of the San Francisco scene.

We had visited the area many times, and my wife had family living there. I had mixed feelings, of course. My roots were deep. But my immediate family had all left Charlotte, so I agreed. It was very hard saying goodbye to all of my friends. I still miss them to this day, but we were out of there. I think it was in 1982.

Once we landed in the Bay Area, we started out in Marin County, in San Rafael. My wife thought it would be a good, more comfortable place for me to adjust. More suburban than city life. It was centrally located to San Francisco and the East Bay. Good call.

We went wild the fist year seeing so many cool bands at long gone clubs: The IBeam, Berkeley Square, On Broadway, The Fab Mab etc…what an experience! So many cool clubs and bands and we absorbed them all with relish. 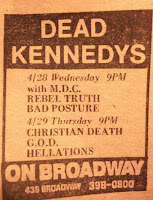 Of course I was itching to find the right band and dive on in there, so I wasted little time and started to check out ads in the local weekly's and the Bay Area's music scene's magazine: BAM.

I started making calls and going to auditions. I believe the first audition was for a Ramone's type punk band called The Breakouts. They were around my age - mid to late 20's and they all wore the required beat up black leather jackets and torn jeans. They had cool hair. So did I! I thought the audition went well. They were good and professional, but still..punk. I did not get the gig. They thought I pushed the beat too much! Ha! Oh well, their loss. Funny…a couple of years later (after I had joined Game Theory) I ran into Rudy (Breakouts lead guy) and he was cool enough to mention that they made the wrong decision about me! Not very punk rock, but the gesture was appreciated.

At some point I ended up with a gig or 2 with a blues band from North Beach. Don't remember how or why, but it was sorta cool. But I wanted in a New Wave band! I answered another ad that sounded promising. The band was called Floating Nude and based in the East Bay. It featured some pretty good players, esp. the guitar player and was fronted by a Berkeley woman that sang very..spacey over a fusion of space rock, funk and new wave. We rehearsed about 6 or 7 times and it just wasn't cool enough for me so I left. Back to searching those ads!

And then..I found this one: 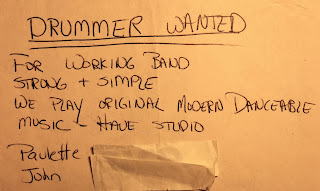 As crazy as it seems…answering this ad (which I think I found in a record store) ultimately and very convolutedly..lead me to where I am today. This time….I..made the right call.
Posted by Gil at 10:58 PM 1 comment: