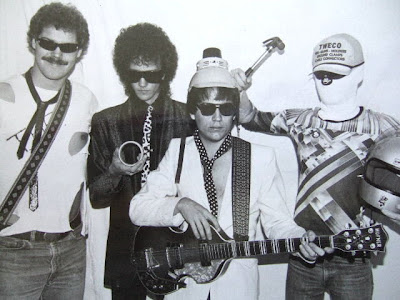 At some point in 1980, Jamie approached Murphy and me about cranking up The Happy Eggs again, but this time it was going to be a whole different ball game than the band that made the 12" single. Jamie was interested in turning it into a punk/new wave band. By this time (thanks to Jamie) I had pretty much accepted that this was indeed fabulous music and while of course I cannot remember the particular details of the discussions that followed, the three of us decided that it was a go.

Murphy would be switching over to a monophonic Korg synthesizer, and the three of us would handle vocals. Jamie knew a bass player - Kenny - and he was brought on board. Our goal was to have a blast, play well, be open to any kind of music and have an insane stage-show. It was the Alice Cooper in all of us! We were naturally irreverent fellas anyway, so no music or style would be spared!

We were a bit older and definitely more experienced than most local punk bands in Charlotte. The Milestone Club had given the area youngsters and punk rockers a place to hang out and see great bands. It was a heavy staple in my diet and I could see the scene evolve. There were bands sprouting up everywhere - some awesome and some sucked - but it was a scene and for the most part a lot of fun. But I remember I felt a tad anxious as to how the scensters were going to accept the Eggs. It’s silly of course, but to these kids, the worst thing you could be was to be a poseur, and since it is my nature to worry, of course I hoped that we wouldn’t be labeled as such. After a while, I didn’t give a rat’s ass about what the kid’s thought. While we certainly were not “punks” (we all had real jobs!), we certainly were licking our chops at the thought of embracing the snottiness. Here we were, 3 smart-ass pals since high school, and since the three of us would be sharing the vocals.....we all had microphones.

It was decided that we would play a mixture of covers (straight versions or drastically rearranged versions) and originals, and this evolved into quite a repertoire. The covers were insane. There were some straight up covers of punk and new wave songs. Lots of Costello, Police, Talking Heads, Iggy Pop, Lene Lovich (!) even some very uncool covers for the time such as Adam and the Ants, which at first made me a bit uncomfortable, fearing that to kids would hate it and give us shit about it. I remember people yelling“Black Flag kills Ants dead” (man..that takes you back, huh?) and that sort of bothered me, but it didn’t take too long for me to get the appropriate "piss off wanker!" attitude and it was indeed fun to get a reaction.

There were also some very..bizarre..covers we would do. Again, some straight some not so straight. Between us, we had many years of being rock musicians already under our belts, so the choices here were quite unique. Some of them were hold overs from our glam rock days and these seemed to fit in quite easily into a punk/new wave context: Iggy Pop, David Bowie, Sparks (I think about 3 songs!) And Alice Cooper. Some didn’t fit in anywhere: The Monkees’ Your Auntie Grizelda pops into mind. And there were many that Jamie would do his magic on and reconstruct into new wave madness. He really liked ska beats, so many of these were rearranged into hyper-fast ska beat beauties: Cream’s Mother’s Lament, Mother’s of Invention’s Let’s Make the Water Turn Black, Spirit’s Dark Eyed Woman. He also came up with a very twisted Devo-esque arrangement of The Doors’ Hello, I Love You that was fabulous!

We did 2 versions of Bloodrock’s D.O.A. We were all familiar with it because there was a while when you couldn’t help but hear it on the radio! (I actually saw them open up for Grand Funk). At first we did it pretty darned straight - Jamie wanted a pretty faithful version. We tried. But dammit, there were just too many quiet parts and me and Murphy could not resist the opportunity to kid around with it (remember...we had microphones!). The nature of the song and the lyrics were ripe for fucking with and we were relentless. Finally, Jamie threw up his arms and gave up on doing it straight. He rearranged it into another brilliant Devo-esque and angular new wave classic which clipped along at a pretty good pace so Murphy and I had very little opportunity to throw in our...embellishments!

But it was Jamie’s arrangement of West Side Story’s Jets Theme that to this day, I think is one of the most creative and brilliant pieces of rock and roll genius I have ever had the pleasure of playing. Ever. He took the original and maybe a tiny bit of flavoring from Alice Cooper’s Gutter Cat vs The Jets and stood it on it’s end. It was fast and full of attitude. It rocked hard..It was funny and it really showed what the Eggs were all about. It’s a snotty masterpiece that retains the original spirit and adds a heaping dose of modern (at the time) irreverence. It was in our wheelhouse.

Coming up next - we write the songs, we record the songs, Jamie turns into the busiest man in showbiz and much, much more!

And Timothy! We played Timothy!

Thanks for reminding me of all those songs!! The Doors, Bloodrock...I had forgotten those (no surprise, considering our usual...condition at those shows)!
You and Jamie and Murphy made positively excellent and straight-up crazy ass music, and I'm so happy I got to see and hear it. I love you guys and have since high school. You know that! xoxoxoxo
God, I wish I had your memory cells...