Good God...now there's an argument for getting the hell out of Charlotte! Not a very articulate example of hipsterism in the Queen City, but it is a hoot. I love the male newscaster’s glasses (!) and the very unfortunate shot of the female reporter’s less than...comprehending... expression as she waits for a reply from Judy!

The above newscasts were Charlotte’s take on new wave sometime in 1980 (?). Oddly, 2 different channels ended up doing the same story on the same night. Unfortunately, an uncomfortably long shot of yours truly cutting a rug shows up around the :47 mark...sigh....(bonus points if you can spot Hope Nicholls from Fetchin Bones)

But The World Famous Milestone was our hangout and what a place it was! I believe it used to be a biker bar, but it’s owner, Bill Flowers, started booking local and regional punk and new wave acts. It was a perfect setting - seedy, rough and in a bad part of town that I never knew existed, far from my familiar suburban ‘hood. But this was shortly after my mom’s death, my marriage, leaving the hood and experiencing what I thought freedom and young adulthood should feel like.

A friend of ours started raving about the place and eventually we all started hanging out there. I’m pretty sure REM was the first band I saw there. Not a bad band to begin with. It was amazing to see their relatively quick progression in making it big - maybe 20 or so people were at the first show! Around the same time, Jamie was making noise about a Charlotte punk band that frequently played the Milestone - The Lunatics (they soon changed their name to The Orphans). So we went and checked them out too. It didn’t take long to establish that this is where we wanted to hang out.

We would go just about any night a band was booked. I used to have a pretty complete list of the bands that played there, but I can’t find it, so on “memory”: Insect Surfers, REM, Boo Boo Boys, Vietnam, Pins, Butchwax, Black Flag, Nervous Tension, Swimming Pool Q’s, Viper, Suzanne Sexless, The Go Go’s, Wild Giraffes, Vandals, Treva Spontaine, Mission Of Burma, None Of The Above, Gangrene....and eventually two bands that I played with -The Happy Eggs and No Rock Stars. (Years later, after I moved to California, I had a once in a lifetime thrill to play an absolutely mind-bending homecoming show there with Game Theory in 1986)

Bill Flowers, who ran the club was a funny guy. He seemed like a slightly twisted Vietnam vet (which I think he was), but he was a nice guy that did his best to promote new music. Not an easy path, and many people could get flustered at times with his..uniqueness, but he was indeed a very important player in Charlotte’s counter-culture scene of that time. But his statement in the above newscast that drugs were not part of that scene was just a tad off the mark. While there was hardly any trouble at the club caused by drugs, they were being used by some and in a big way.

Quaaludes were the drug of choice, and what a nasty drug it was. Not glamorous like coke, or mind expanding like acid or mushrooms. They were downers. Very strong downers. I often heard them referred to as horse tranquilizers. I honestly don’t know if horses ever had the pleasure of this particular drug, but we sure did. Some people just pass out from, but with our crowd it gave an intense and tingling energy. A very sloppy energy, and for some reason it turned us into dancing fools (see above). And dance we did. It’s the only time in my life I wasn’t too self conscious to dance. It stripped all inhibitions away. It delivered a total hedonistic orgasm. We used it as a social tool, but it probably just made us more insular to our small group of friends. It delivered sex, drugs and rock ‘n roll on a grand scale. It was dangerous, but fortunately no one died (we were very lucky). It could have bad side effects, but most of us overcame them. It could make you do stupid things and it could completely and permanently erase from your memory bank what you actually did that night. But with all of that being said, I cannot deny that it was probably the most exhilarating fun I have ever experienced. We had found our new drug to go with our new scene. 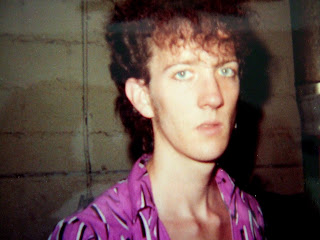 The gay nightclubs were a far cry from the Milestone, but new wavers were welcomed. Folks started to dress outrageously, in some cases breaking through gender boundaries. Make-up was for all people, not just the girls. Hair styles became pieces of art. Many of our gay friends worked or owned adult bookstores which brought a whole new set of rules to the table! The common ground was discovered and we ate it up. It was a full on cultural upheaval, similar to the hippie movement I came in late on, but we weren’t trying to change the world this time. We just wanted our own world and the freedom to do whatever the hell we wanted to. In a sense, I guess it was very similar to the disco daze; it was a very narcissistic way of life.

And how we danced. For the only time in my life I got it. We all did, and if the drugs and the bands were right, we danced our asses off. At this point in REM’s career, it’s hard to fathom that at one point they were absolutely the best dance band on the planet. Atlanta’s Vietnam was another one of our faves to dance to, as were D.C.’s Insect Surfers. We had a blast, and if a punk band was on the stage, we’d do our best to slam dance and not get killed in doing so. We were numb, but were feeling everything. Our senses were on fire and our bodies were out of control.

But then I see this photo of myself and 2 dear friends during that time. (I love this photo! Wynn took it and I love the composition. It strikes me as being very Felliniesque.) 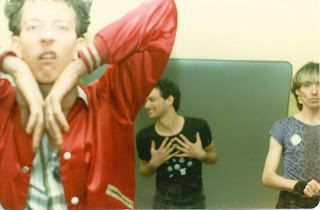 I mentioned that no one died during those drug addled days, but I would be an idiot to not recognize that the drug culture we embraced eventually caught up with some of us. I’m the only one in that picture that is still alive. Quaaludes didn’t kill them, but that type of lifestyle, and the irresponsibility of failing to at least occasionally check in on one’s own emotional health, did eventually lead to their deaths in one way or another. They died at different times, from different causes, but they are both gone. Maybe we weren’t so lucky after all.

Hope Nicholls... *sigh*. Fetchin Bones opened for you guys in, I think, 1986 in Madison, in a club that later got plowed into by a truck one morning at 3am - I was so charmed by her performance that not even Donnette and Shelley's Dress Wars could fully engage my attentions...

Pretty amusing video... Hard to believe that was, what, 28 years ago?

Funny thing about the "Dress Wars"...I remember that show and there was some tussling for the backstage mirror....Meow! I think we may have opened...regardless, I hated the stage with the front window being the backdrop! I think...Hard not to love Hope!

I wrote an article about NC music, long before we could all find each other so easily on the internet. I spent about 10 years researching the G'boro/Winston scene and the Raleigh C-Hill/Durham scene (and a fortune in photocopies and long distance phone calls). I alwasy regreted that Charlotte wasn't better represented in the peiece and wonder if you'd like to speak about such things as The Happy Eggs and No Rock Stars now. Here's the original:
http://www.furious.com/perfect/nc-punk.html